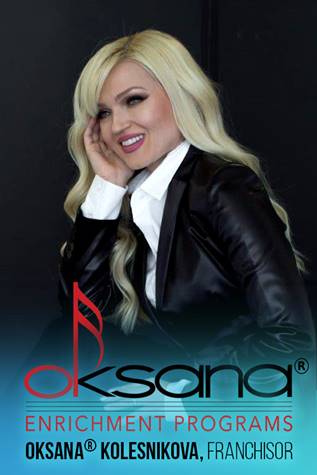 Inspirational and visionary…the elegant Russian-born American, Oksana® Kolesnikova, is an internationally renowned pianist and composer, educator, innovative music, and personal mentor to the franchise owners of Oksana® Enrichment Programs. She is the CEO of three companies: Oksana® Management Group, Inc. (OMG, Inc.), Oksana® Enrichment Programs, and Oksana® Foundation. In 2019, she launched franchising opportunities for her tutoring and arts-focused business, which was already successfully operating with a large roster of tutors and was established in numerous schools. Born from her love of music performances, composing, and teaching music and languages to students, she sought to provide a quality-based resource for student enrichment beyond what her high-demand, one-on-one lessons would allow. A remarkable example of “The American Dream,” Oksana® is the beautiful face for her brand, bestowing upon it her golden combination of diligence, drive, global outreach, entrepreneurial spirit, and sheer talent.

After falling in love with the piano at five years old, Oksana® began classical piano lessons when her family moved from Siberia to Kazakhstan Russia. Inspired and focused on developing her talent, she began winning music competitions only four years later.  Blessed with parents who were educators who sought more opportunities for their children, Oksana® emigrated with her family to the U.S. after the Soviet Union dissolved. They settled in St. Petersburg Florida.

While enrolled in what is now St. Petersburg College, Oksana® won the Florida State Young Artists Symposium Competition as a junior. This honor secured her a scholarship to the School of Music at Florida State University, where she graduated with honors in 2001. Her entrepreneurial spirit and her skills in marketing and branding took root as she began booking piano performances to showcase her talent across Florida. She had a growing fan base, and her gigs included charitable and business galas, private events, and a recurring booking on the Home Shopping Network (HSN).

She fell in love for a second time when she met her husband-to-be, Alex, at his birthday party in 1999. Oksana®’s partnership with Alex, who had emigrated to the U.S. from Italy, launched a remarkably productive and creative new chapter. He became her manager, and they developed strong national and international relationships.

In 2003, Oksana® became the first Russian-American female pianist to travel overseas to entertain the U.S. Troops. She made two world tours on behalf of the Morale, Welfare and Recreation (MWR) Department of the U.S. Navy. She made a solo tour to entertain the U.S. Troops in September 2003, stopping in Italy, Spain and Greece. In February of 2004, she went to Asia, including stops in Guam, Korea, Japan, Okinawa, and Singapore with Navy MWR. She also was invited to perform for U.N. officials in New York City.

2006 was a pivotal year. She proudly received her U.S. citizenship and also performed in Italy at the Salento International Film Festival on opening night. Looking to relocate into the center of the entertainment world, Oksana® moved with Alex to Beverly Hills, California. There, she landed the prestigious position of pianist at The Polo Lounge, the legendary 5-star restaurant and bar in The Beverly Hills Hotel. Oksana® performed there every week from 2006 to 2013, entertaining an ongoing celebrity roster of who’s who in the world of entertainment and business. During that time, a growing demand began for her to perform at private parties and charitable galas, as well as to teach piano lessons to adults and children in the Los Angeles region. She especially loves working with children and met these new opportunities with ambition and grace, building an expansive and well-connected list of clients. Her fan base continued to grow online. During her tenure at The Polo Lounge, she performed straight through her pregnancy, bringing her cherished son into their family in 2009.

Skillfully utilizing her business experience and relationships in Los Angeles, she sought to meet needs expressed by schools and parents and to cultivate her personal brand.  She established Oksana® Management Group, Inc. (OMG).  Her company was awarded 2014 Best of Beverly Hills Award. Her stellar reputation translated into the company becoming the main choice of celebrities who sought lessons for themselves or loved ones. To meet logistical issues, she began incorporating lessons through Skype when appropriate, enabling her to teach out of town and international students.  Pursuing cross-promotions, mutually beneficial collaborations, and endorsement arrangements, Oksana® studied the business practices of highly successful companies and carefully began partnering. Her focus and theme, which underpin her business, have always been to work only with people and companies with whom she has a deep respect and a friendship.

Family-oriented, Oksana® and Alex decided to move to the Santa Clarita area in 2016 to create a comfortable home. This move enabled Oksana® to partner with local organizations to lead networking events, build her private lessons in music, languages and tutoring, and grow her establishment of after-school enrichment programs in the region. She increased her roster of tutors and further developed her relationships with schools, school districts and municipalities to offer arts and tutoring.

By 2019, Oksana® Management Group, Inc, encompassed dozens of tutors, countless students, and relationships with many schools in Southern California and beyond. Maintaining her focus on quality and integrity, she chose to personally select her tutors. A second-generation educator, Oksana® sought to bring a range of programs to meet rising student and school needs. Her company offers private, one-on-one lessons in the areas of music, foreign languages, and academic tutoring in all subjects, K through 12, with potential for additional subjects such as voice/choir, art, acting/drama, and foreign languages, as well as tutoring and test preparation.

Working for a year with a franchise specialist, Oksana® launched an official franchise opportunity for her scholastic and arts youth education platform in October of 2019 by opening Oksana Franchising International, DBA Oksana Enrichment. This step has enabled the expansion of her scalable, innovative programs both nationally and internationally.

In addition to Oksana’s corporate endeavors, she also founded in 2020 Oksana® Foundation, a 501 (c)(3) nonprofit whose goal is to provide extracurricular education to underprivileged families.  She also organizes networking events to help others with business development. She continues to mentor a limited roster of piano protegees, business consulting, compose original music, and perform Live concerts for special events, especially fundraisers for her Foundation.

In early 2020, Oksana® was presented with an Award of Excellence in Education at a pre-Grammy Awards party at the Los Angeles Chargers penthouse headquarters, where she also performed some of her original compositions.

Oksana® has recorded eight CDs of original, classical and popular music and her own instructional video for students of piano. Her “Free Floating” CD won the 2010 Best Classical Album of the Year on SoloPiano.com.  She has collaborated with other international musical artists for recordings, and her original compositions have been chosen by international artists to record on their own CDs. Her CD, “Best of Two Worlds,” evolved from a collaboration with notable fine artist Jim Warren. “Oksanabella,” her YouTube channel featuring her performances, has nearly 3 million upload views from all over the world.

Oksana Kolesnikova, CEO/Founder of Oksana® Franchising International, Inc., has been accepted into the Forbes Business Council, the foremost growth and networking organization for successful business owners and leaders worldwide.