“Dr. Viossy couldn’t have done ‘The Voice of Life’ better justice. He captured the soul of the song, made it his, and generated this new masterpiece I am truly proud of,” Oksana says. Listen to this special version here: Dr. Viossy’s Metal Version of The Voice of Life.

Oksana wrote “The Voice of Life” for her own wedding in 2000, where she performed it for the first time. She has dedicated her composition to all people who are in love.

Oksana is no stranger to exciting collaborations with talented artists; in 2015 she collaborated with singer-songwriter Arielle Peri, who created an EDM version of the same love song. 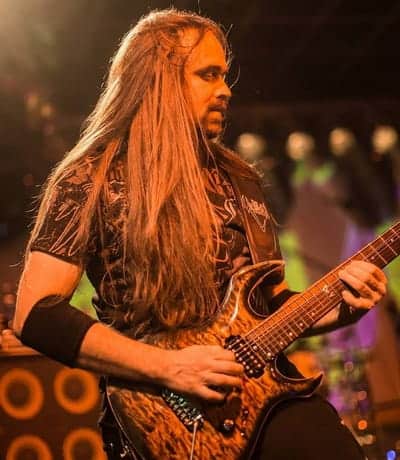 Michele started studying Music when he was a child and his love and devotion for Music and guitar made him one of the world’s most well-renowned guitarists. He’s been playing with his lifetime friend Michele Luppi (keyboardist for Whitesnake) since they were children.

Dr. Viossy is the most viewed Italian rock/metal guitarist on YouTube. His rendition of Beethoven’s third movement of “Moonlight Sonata” on electric guitar became viral in a few months, with over 17 million views so far. The rendition shows not only his dazzling technical skills, but also his classical music background and expertise.

Oksana Yurievna Kolesnikova is a concert pianist, composer, and businesswoman; based in Los Angeles, CA. She was born in Siberia, in the city of Barnaul, and immigrated to the United States at age fifteen after the breakup of the USSR. Her extensive discography includes eight albums of classical, new-age, and popular music. Besides composing and performing, she also owns and operates the Oksana School of Music and other businesses. 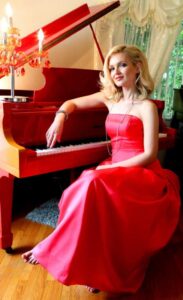 Oksana began studying classical piano at age five in Russia. After moving to the United States with her family, she attended the St. Petersburg College in St Petersburg, Florida. In 1999 Kolesnikova won the Florida State Young Artists Symposium Competition. Winning the competition earned her a scholarship to the Florida State University School of Music, where she graduated with honors in August, 2001. In 2006 Oksana became a US citizen, and in 2000 she married her Italian-born manager.  They have a 7 year old son.

The Oksana School of Music currently employs over 50 teachers and serves hundreds of students primarily in Beverly Hills, Santa Clarita, Rancho Palos Verdes, and Los Angeles. Besides operating the school, Oksana has released an instructional video for students of piano. Dr. Viossy is Oksana School of Music’s most sought-after online celebrity guitar instructor.